I find that searching through my hundreds of bird captures - I have had the female here before the males showed up. I don't see that well anymore and had given up on trying to ID the many 'sparrows'.

They are now united and I have three pair checking out the neighborhood.

I had these two show up for a snack. Wondering if they are a pair or a couple of males looking for love. I've never seen them here before. Think they are a couple of fly-by eaters. I tried to get different views for I.D. 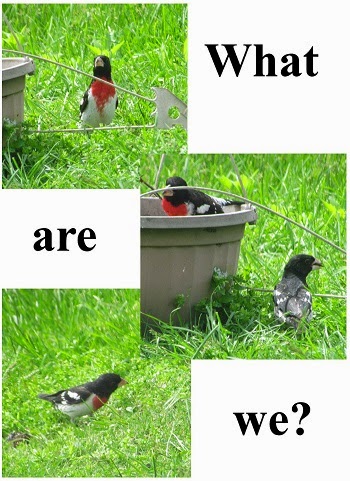 Time for a letter from home...

I hope you are enjoying whatever you do on this weekend, Passover, Easter... We are having a hazy day, things are beginning to green up, and pollen fills the air. I’ve had my first crop of dandelions with hopes that some bees enjoyed nourishment. The second mowing can proceed at any time. It appears the newest growth of figs last year were frozen out during the below zero temperatures over the winter. The old parts still stand, as the birds seem to like them for landing on and surveying their territory. I get a kick out of watching the various varieties of birds and their reactions to one another.

Last week, we had a hailstorm, half an hour later a repeat and still another hour later, another one. The same stupid cloud, it didn’t seem to want to move on and pound on other people’s cars or roves. We had removed the insulation over the attic fan during a smoky food event, forgetting to replace it. Loud, let me tell you. The hail was penny to nickel size. Rain on a metal roof is one thing, pleasant even; hail on a metal roof is a whole different story. Hailstones hitting the windows, man, it sounded like Armageddon in here! Nothing was broken, dents in roof and cars though. Please excuse the terrible picture—taken, as the light was fading and the frozen stuff was still coming down. I was not going to put the window up and boink my camera.

My youngest is staying for a while; with DH gone all the time, it is nice to have a body in the house. He likes things quiet as much as I do. Bliss! He put a beginner’s 3D modeling program in my computer that is fun. (I’m not any good at it though.)

I have been reading quite a lot of the FREE books on Smashwords. There are some extremely good stories out there that will never get anywhere because so many people think they are writers. (Also, some absolutely awful stuff. Free doesn’t always mean worth your time.) There is a glut of books out there; I’m talking tens of thousands that will never see the light of day as more and more come in every day. It is not only Smashwords, it’s Createspace and the numerous other “book makers” on the web.

Not going to whine about how crappy I feel, it is what it is.


I hope you are having a quality weekend with those you love!
Posted by Sharon at 10:40:00 AM 6 comments: