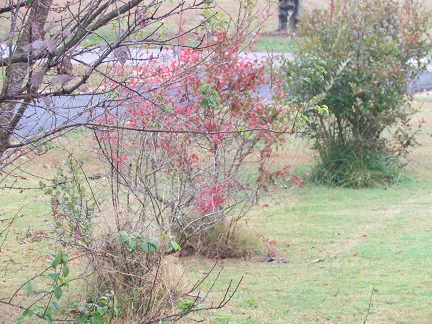 Back to the grind.

"The Black Widow" is over. It was much condensed and I changed the end to make for a good feeling at the end. All too often, I wanted to be a tad macabre with my stories and usually ended up making them nicer ... 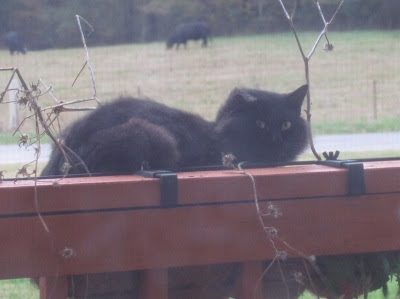 Having a little trouble with Simon. He has decided to be "King of the Castle" and will not allow Tacky on the porch to get her food. As you can see, he has made himself a crow's nest out of the rail planter to watch her better. I didn't see her for a couple of days and I was pretty worried about her and ready to wring his little neck if he had really hurt her. Sigh, I guess I will have to try to re-home him if they can't get along. Found Tacky in the part of the garage where we keep the lawnmower, so she is okay for now. (Whew!) 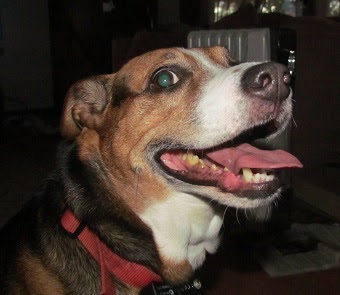 A happy picture of Jill. Looks like it's time to take her for a tooth cleaning. That smile won't last when she finds out. 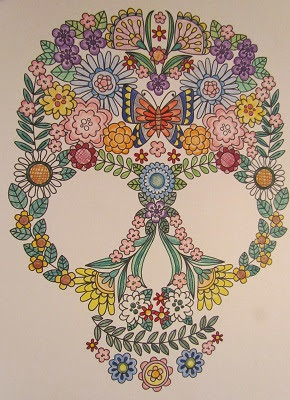 All Souls Day tomorrow today. I just finished coloring this, I like it.

On other fronts, DH had appointment with the cardiologist, the girl at the desk called and confirmed the time and date, I had the phone on for him to hear it too. I wrote it down and DH put the info in his phone at the time. So, the day came, he drove like a crazy person to get there in time. I guess butter wouldn't melt in that jane's mouth when she told him as he skidded into the office, "Doctor doesn't see anyone on a Tuesday, your appointment was yesterday." She wanted to reschedule, he told her to call if there was a problem. This was the third time they had a mix-up with the time. A nurse called later and said he was fine.

I had quite a few ripe tomatoes, so I tried my hand at roasting them. The smell here in the house was almost overwhelming. Mmm, that roasting garlic!

We finally had a hard frost. The fig tree leaves are all curled and getting crunchy. Summer is officially over. Sigh ...

Email ThisBlogThis!Share to TwitterShare to FacebookShare to Pinterest
Labels: "This and That", Coloring, Jill, Simon, Tacky


The ride to the hospital gave her mixed feelings. The unknown made her want to get away and yet she was happy that the horror was over. Newsmen, cameras, and people pushing a microphone into her face met the ambulance, and wanting information. At that time, she was just a survivor of a grisly murder scene. Her father had murdered her mother, tried to murder her, and then he bludgeoned her uncle to death. When they found Arnold’s body, the police tried to say she had killed him. Until his autopsy, they wouldn’t know how she had done it. They put her in a room by herself with an armed guard stationed at the door. A nurse came into the room to clean her wounds. She began asking questions, and then she took her picture. Mallory screamed for the guard, who took the camera away from the nurse. Three days, she sat in her room alone, and then the guard was gone. Her father had taken the police on a chase through town, crashing headlong into the bridge supports. There was another onslaught of doctors, police, and reporters.


A detective told her that Arnold had suffered from a heart attack; she was off the hook for his demise. Mallory had figured that, they could have asked her.


Some paper shuffler found her marriage records and she was news again. Many of the nurses made her feel dirty, as if she had gone along willingly with their crooked schemes. Some of the nurses stood up for her, feeling pity for the young girl forced by her parents to marry at such a young age. They questioned her, time after time, asking who her relatives were, and where they lived. The funeral had come and gone for her mother before she got out. She didn’t care, not having any feelings of affection for her.


Once the bruises healed, they moved her to a different kind of hospital to sort out her mental issues. When the newsmen tried to talk to her, insinuating that she had participated in the plans of killing off the old men, she threw things at them or screamed. She often wished she were back in the basement, by herself. The constant poking and picking of her brain was as uncomfortable as life had been with Gabriel. Why couldn’t they just leave her alone?


Of course, this gave the headshrinkers added fuel for their fires, saying she was apathetic. They said she was antisocial. She wouldn’t watch television. The shrinks thought it was odd behavior. She didn’t want to hear the news bulletins about the ‘Black Widow’ anymore. Even the orderlies were calling her the Black Widow behind her back, though, loud enough for her to hear. They made jokes about her. She had a roommate, who gave her a wide berth, staying out of the room whenever possible. Rumors had spread throughout the hospital about how strange she was. Mallory didn’t have a single friend and the only visitors she had were police or detectives, to ask more questions about things she didn’t know.


One Saturday afternoon, Doctor Kane summoned her to his office. He told her to sit down, handing her a pill and a glass of water, which he instructed her to take. Then he started talking about his flower garden to let the pill begin working.


“Mallory,” he began, “The people who you thought were your parents... well... they most likely bought you from someone that took you from your home when you were a toddler. We have no way of knowing, they may have taken you themselves. The police found your real identity through your fingerprints at the house; you were finger printed when you were two.”


“I have different parents? Do you know where they are?” That was great news she thought. Her heart raced and she began to feel dizzy. Whatever the pill was that the doctor gave her wasn’t working too well. The room around her began moving in slow motion, as the doctor called someone into his office. The door opened slowly and gradually the doorway filled with a tall, thin man, who wore a hesitant smile. The man said something to her, but her heart was pounding so loudly and he spoke too softly to understand what he said. He walked toward her. Mallory slumped down in her chair as she passed out.


Waking on the sofa in the doctor’s lounge, Mallory saw the man seated in a chair across the darkened room. He watched her with sad eyes that looked as if he had been crying.


“They tell me that you go by the name of Mallory,” he said. “I doubt if you remember me, but I am your father, and we named you Hope.”


“Yes, but she thought she would come at a different time. We aren’t together anymore, I’m sorry.” He looked overwhelmed with emotion.


“Do you have any pictures?”


“No, I’m sorry, I left in such a hurry when they called, I didn’t think about it. I called Amy, your mother, from the airport. You look a lot like her. Can we go for a walk or do you have to stay in the building?”


“You’ll have to ask Doctor Kane about the rules. I have never had a real visitor before.”


Her father left the room and returned with Doctor Kane. He released her for a weekend visit, to see how everything went. He instructed Mallory to put a change of clothes in a bag to take along.


Her father looked worried and embarrassed, as he asked the doctor where an inexpensive motel was. The doctor was prepared; he had coupons for motels and meals ready, in an envelope in his pocket. Many of his patients would never see a visitor if it wasn’t for some kind of compensation. He knew this was not the case in this instance. There was a motel within walking distance.


“She is ready to be released, if she has a place to go. I didn’t know you and your wife had divorced until I called. It’s not an ideal situation. She needs introduction back into society in a family setting, but you can’t do that. What are her mother’s circumstances? Does she have a stable home environment for her?”


“I don’t know much about Amy’s life anymore. She’s married again and has three small children. When I told her that they found Hope and told her that I was coming up here, it had been a couple of years since we spoke. I lied to Hope about Amy coming at another time. She didn’t mention it. I think Hope would be walking into a built-in babysitter position. I don’t know if that would be good for her or not.”


“I don’t see any information about her siblings, where are they now?”


“Richie died in the service last year and Emily is in college. It costs a lot of money these days. I do appreciate the coupons, thank you.”


“Well, you two enjoy your visit and I will look further into it. Do you think you are ready to take on the responsibility?”


“Let’s see how this weekend goes, but yes, if at all possible I want to take her home.”


Mallory stood in the doorway, mouth open, unable to speak. She had a brother that died, a sister somewhere off in college, and a mother with a new family of her own. She cleared her throat. “I’m ready,” she said quietly, praying silently that she was.